The Indirect Approach and Two Key Principles Every Business Owner Should Know. 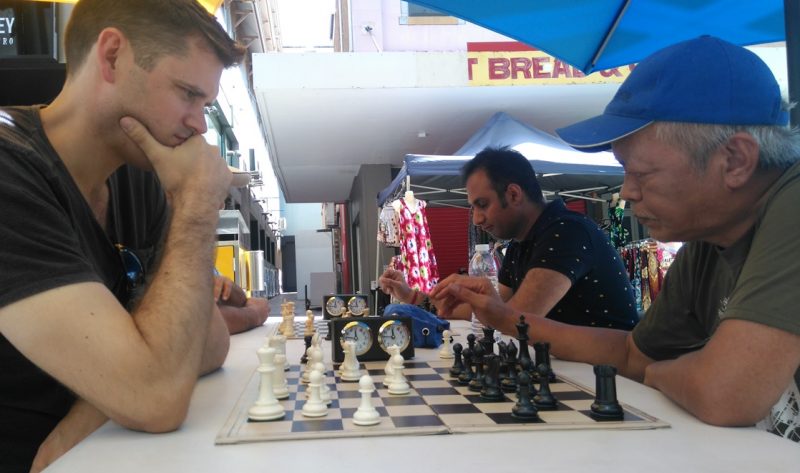 What is the Indirect Approach? Well, I first need to tell you a story…

It was a bright and bustling Sunday morning at the Fortitude Valley Markets.

The social chess scene was friendly but competitive, the passers-by an eclectic mix of everyday Brisbanites, families, singles and couples. They were going about their business mostly just passing through, some stopping by to get food or drinks, others staying to watch the live music or browse items at the local market stalls.

I’d finished a game of chess and was waiting for another opponent to show up. My eyes drifted across to the local book stall nearby…

I was having trouble sleeping at the time so was on the lookout for a boring book. I’d figured I needed to find one that was interesting enough to make me want to open the front cover but dull enough that once I’d opened it, I’d quickly lose interest and fall asleep.

I glanced across the tables scanning across the business, personal development and other non-fiction sections. I came to a spread of books on history and thought to myself ‘perfect’, here I‘ll find myself an exceedingly boring book that will put me to sleep in no time at all…

Well, this is the book I found:

Later that night back at home I settled into bed ready to test out my new sleeping aid.

After opening the book and reading the first page of the preface it read:

“All warfare is based on deception. Hence, when able to attack, we must seem unable; when using our forces, we must seem inactive; when we are near, we must make him believe we are near. Hold out baits to entice the enemy. Feign disorder, and crush him”. And so on and so on.

Wait a minute…I thought to myself with mild suspicion. This text was sounding increasingly familiar. I quickly scanned further across to the next page.

Sure enough, this B.H. Liddell Hart character was quoting none other than Sun Tzu!!! Chances are you’ve likely heard of his most famous work called The Art of War (which is also essential reading).

“I had inadvertently stumbled across a most precious and valuable text”

B.H. Liddell Hart then proceeded to detail every major war from Alexander and the Greek and Roman Wars right up until 1945 and World War II. I didn’t read this all over one night, however, continued to mow through page after page every night for the better part of a week, until I’d finished the book in full.

I’d completely failed in using it to get me off to sleep faster.

While the book was at first slow to start I quickly realised I had inadvertently stumbled across a most precious and valuable text.

So what are the key takeaways?

There is one critical concept and two key principals that I learned from this book.

The critical concept is the art of using The Indirect Approach.

Through countless battles in history, the generals who have most often won on the field of battle were not the strongest or the ones with the biggest armies but, those who were able to use The Indirect Approach.

This means that instead of striking their opponents through frontal assaults, generally where they’re at their strongest, they focused on attacking their weak points. For example, hitting at a fold or crease in an opponent’s armour… or when talking about whole armies, by attacking supply lines, drawing them out of defended positions, etc.

B.H. Liddell Hart shows how in numerous wars, the generals who used these principles were able to repeatedly defeat their enemies despite insurmountable odds and limited resources.

The two key principles that make up this Indirect Approach include understanding and utilising:

Principle #1 – The ‘Line of Least Resistance’.

Let’s consider what happens in the wild: a wolf pack will never attack the strongest deer… they target the young, the old, the sick, the injured or the dying first. In the African Savannah, lions don’t hunt bull elephants, only newly born calves or old and weakened targets. In the ocean, anything bleeding or dying will usually attract sharks very quickly… are we seeing a pattern here…? Nature can often seem cruel, however, it’s also incredibly efficient. We can learn a lot from this.

Similarly, these principals can be used to great effect in our own lives.

For instance, the equivalent in the business world is for companies to target the ‘low-hanging fruit’ or sell to the customers who most naturally want to use your products. It’s a well-known accepted truth that the cost of acquiring new clients is much greater than selling additional products or services to your existing customer base.

Why is this? Well, quite simply it takes time and energy to build sufficient trust that will lead to a successful transaction. With existing customers, this connection is already in place.

A thought to ponder… are you currently spending too much time on chasing new business from cold prospects when you could instead be talking to your existing base?

In other words, most businesses when left to their own devices without sufficient insight and planning will naturally attract customers who do not provide much value to that business relative to the amount of money that they pay.

How do we fix this?

Well, the first step is to realise that we can’t sell to everybody, all of the time.

Similarly, we’ll never be able to make everyone 100% happy with every interaction, it’s simply just not realistic. That said, part of the reason for this is that by trying to compete on everything and fail to be outstanding at anything. Competing on a weakness is bad business.

Is this to be unexpected? Of course not! They’re so busy running around trying to keep up appearances that they end up falling short anyway.

Don’t become a “jack of all trades and a master of none”. In the long run, it’s far easier to focus on building up your strengths and developing products and services for a niche target audience or tribe.

What we need to do is focus on the clients that provide the most value to the business.

For instance, in the long-run it will be far more lucrative for a recruitment or HR consultant to focus on one particular industry niche, for instance – doctors or nurses only, than trying to cater to multiple industries at once.

Q: Are you currently competing on your weaknesses instead of your strengths?

If so, then it’s time to stop doing this and ask yourself what is my business best at? And focus on doing more of that instead!

Integrate the ‘line of least resistance’ into your way of doing business.

Practical examples of ‘The Line of Least Resistance’:

By focusing on giving away a free service first, they can gain the chance to demonstrate their value (risk-free) to new prospects by diagnosing problems in a high-trust low tension manner. Once they’ve identified any issues, they can proceed to quote the prospect on the work required to arrange the fix.

Principal 2 – The line of least expectation

This principle can best be translated into the idea of ‘being surprising’. Like the most successful generals of the past, you too can become more compelling in your everyday life by acting in a unique and unexpected way.

Another way of thinking of it is to just, be surprising or unique!

What examples of the Indirect Approach (line of least resistance & the line of least expectation) have you seen working well in everyday life? Please like, share and comment below.

Finally, I do NOT recommend this book as a useful sleeping aid:

If you enjoyed this blog post, feel free to read more here: http://adambenlomsargis.com/# What is Your #1 Asset? (most people get this wrong) 9 Reasons You Should Be Setting Goals

« Previous post
What is Your #1 Asset? (most people get this wrong)
Next post »
9 Reasons You Should Be Setting Goals